Vancouver, Canada, April 21st, 2020 – Group Eleven Resources Corp. (TSX.V: ZNG; OTC: GRLVF; FRA: 3GE) (“Group Eleven” or the “Company”) is pleased to provide an update on its corporate strategy and a summary of the Company’s achievements since its initial public offering in late 2017. After several years of diligent work, the Company has now completed the groundwork necessary for a much more focussed exploration strategy going forward. Drilling is expected to commence in May 2020.

“Our goal continues to be a world-class zinc discovery,” stated Bart Jaworski, CEO. “The Limerick basin has all the hallmarks of the next Navan1-scale zinc system in Ireland. We’ve narrowed our first immediate target area to a two-by-five-kilometre swath of prime ground in the Kilteely area, representing the geological mirror image of the Pallas Green system on the opposite side of the volcanic complex. By surrendering non-core licenses, we’ll be better able to focus on our 1,200-square kilometre ground position in the Limerick basin, with a view to conducting larger, more sustained drilling campaigns in the future.”

Group Eleven has accomplished a number of key milestones in Ireland since the Company’s initial public offering on the TSX-V in December 2017. These accomplishments include a maiden mineral resource estimate (MRE) at the Stonepark2 Project in Co. Limerick (“Stonepark”; 76.56% interest: Group Eleven; 23.44% interest: Arkle Resources plc) and an updated MRE at the Ballinalack3 Project in Co. Westmeath (“Ballinalack”; 60% interest: Group Eleven; 40% interest: Nonfemet). Equally important, key new exploration models have been developed and recently corroborated by drilling, including (i) the Pallas Green Corridor and (ii) the Ballinalack antiform crest4. The Company has also continued data compilation and analysis of two zones which were identified prior to the IPO: the Cooleen prospect at the Silvermines Project (“Silvermines”; 100% interest: Group Eleven) and the Castlemaine prospect at the Tralee Project (“Tralee”; 100% interest: Group Eleven). Platinum and palladium potential was also recently identified for the very first time at Ballinalack, showing the best such drill intercepts ever achieved in Ireland5.

Boliden’s Navan zinc-lead mine (“Navan”), located in eastern Ireland (see Exhibit 1), represents one of the largest zinc deposits in the world, with over 130 million tonnes of current resources plus historically mined material1. The Limerick basin, located in central Ireland, is quickly becoming one of the most prospective – if not the most prospective - parts of Ireland in which to search for the next Navan-scale zinc discovery. In part, this reflects the mineral endowment of the Limerick basin which is already the largest in Ireland outside of Navan itself, despite the basin being a relatively new camp.

The Limerick basin hosts the Pallas Green6 and Stonepark2 deposits, as well as, a number of smaller prospects, all of which are not yet fully defined. Besides mineral endowment, key geological similarities between the Limerick basin and Navan area include: (i) age of mineralization; (ii) host rocks (limestones; albeit different stratigraphic units); (iii) style of mineralization (Irish-Type MVT); and (iv) regional setting (both occur in large trans-tensional basins along the Iapetus suture (see Exhibit 1).

The third-party consultants7 who prepared the Ballinalack and Stonepark MREs, stated that each deposit is open along and across strike, has significant exploration potential and warrants further drilling2,3. However, systematic step-out drilling around the current resource estimates has not yet been conducted. During the Company’s ‘Big Think’ phase of exploration, the emphasis was on testing high-level conceptual targets, with resource expansion drilling kept to a minimum. It is important for investors and shareholders to know, however, that these relatively easier, ‘lower hanging fruit’ targets will feature more prominently in the Company’s exploration plans going forward, now that the large-scale structural corridors have been identified. 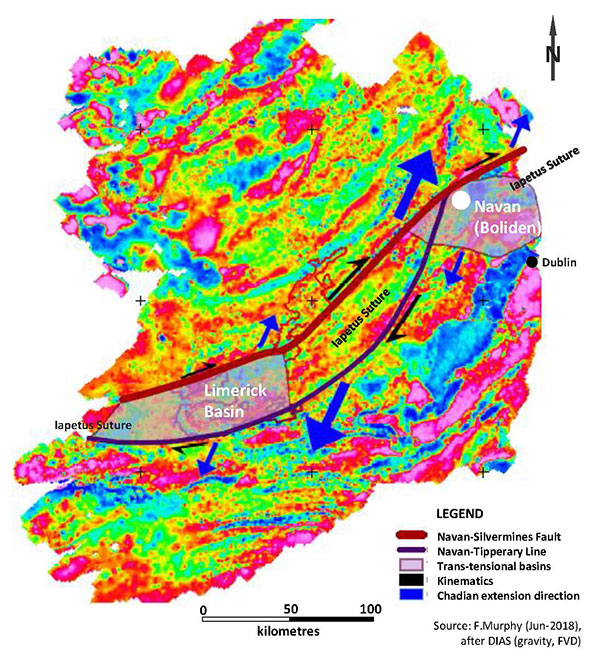 The Pallas Green Corridor, identified by Group Eleven in 2018/2019 as a 20-kilometre-long mineralized corridor extending from Glencore’s Pallas Green zinc deposit6 towards the southeast, was tested by two holes drilled by the Company8. The Kilteely hole, located mid-way south along the corridor (on the Stonepark project), intersected 230 metres of an extensive hydrothermal system with considerable multi-textured iron sulphides (pyrite and suspected marcasite) and other geological features (brecciation, silica flooding and locally elevated zinc levels) indicative of proximity to a new major zinc system. The Ballywire hole, located on the southern end of the corridor, intersected 36.5 metres of intermittent, high-grade zinc mineralization (e.g. 0.75 metres of 10.6% Zn + 2.5% Pb and 39 g/t Ag) representing a 260-metre step-out from historic drilling and the best results to date at the Ballywire prospect.

The above two drill holes opened up two specific areas of very high prospectivity: (i) an area measuring approximately two kilometres by five kilometres trending northwest of Kilteely towards the Pallas Green deposit; and (ii) an area roughly 300 metres by 1,200 metres to the east and adjacent of the Company’s recent drilling at Ballywire.

In addition to the above, the Company verified that the existing Stonepark deposit itself is open to expansion. In mid-2018, an angled hole drilled by Group Eleven through the resource intersected a thick zone of high-grade mineralization (5.40 metres of 25.0% Zn + 7.2% Pb and 12.2 g/t silver9). Importantly, the hole did not encounter a fault previously thought to truncate the eastern side of the resource estimate, hence demonstrating the deposit remains open in this direction (towards the nearby Pallas Green deposit6). Follow-up drilling aimed at resource expansion is yet to be done in this area and many other areas of the Stonepark resource remain open.

The Company’s significant financial contribution towards the Geological Survey of Ireland’s Tellus airborne geophysical survey covering Group Eleven’s entire Silvermines and Stonepark (and PG West) projects led to a much clearer picture of the regional geology and structural corridors in the two camps. Major new lineaments and anomalies were identified in the Limerick basin, including a 40-kilometre-long WNE trend (suspected fault structure) and large new circular features (suspected buried intrusives) on the PG West and Stonepark properties, respectively10. These features are yet to be drill tested.

Strategy for 2020 and Beyond – More Nimble and Focussed

Group Eleven’s large ground position (approximately 3,000 square kilometres; the largest in Ireland) will be significantly reduced over the next few months now that first-pass, regional synthesis (‘Big Think’) is substantially complete and high-priority targets have been identified. The focus going forward will be on the Limerick basin (Stonepark and PG West projects) with other smaller, core holdings to be retained at Ballinalack, the Cooleen prospect at Silvermines and the Castlemaine prospect at Tralee. All other licenses will be surrendered. Note, the Ballinalack property was reduced by approximately half in late 20194.

With a much smaller ground position, Group Eleven will be more nimble and be able to focus significantly more attention to each target with a view to conducting larger, more sustained drilling campaigns in the future. With regards to cost minimization, the Company began taking steps in mid-2019 to significantly lower overhead costs, including moderating staff levels to reflect a more focussed stage of exploration.

An exploration program, including approximately 1,000 metres of drilling, is anticipated to begin at the 100%-interest PG West project in May 2020, subject to COVID-19 restrictions. This drilling will include follow-up drilling in the Kilteely area. At the 76.56%-interest Stonepark project, exploration is anticipated to begin in August 2020 and include at least 800 metres of drilling. The above fieldwork is fully funded and does not require any further financing by the Company. In order to expand and accelerate exploration and drilling in the Limerick basin, however, Group Eleven continues to look for strategic partners. Discussions continue with interested parties.

In order to increase the Company disclosure on more in-depth technical information, Group Eleven has made available on its website, detailed compilation presentations on key target areas, as well as, pertinent mineral exploration information on Ireland.

Group Eleven Resources Corp. (TSX.V: ZNG; OTC: GRLVF and FRA: 3GE) is a mineral exploration company focused on advanced stage zinc exploration in Ireland. The Company’s key project in Ireland is a 76.56% interest in the Stonepark project (joint ventured with Arkle Resources plc) and a 100% interest in the adjacent PG West Project, located near Limerick, next to one of the world’s largest undeveloped zinc deposits: Pallas Green deposit.