Vancouver, Canada, March 19, 2020 – Group Eleven Resources Corp. (TSX.V: ZNG; OTC: GRLVF; FRA: 3GE) (“Group Eleven” or the “Company”) is pleased to announce that recent drilling at its 60%-interest Ballinalack Zinc Project (“Ballinalack”) in the Republic of Ireland, has intersected a shallow and thick zone of strongly anomalous zinc and lead mineralization within the Navan Beds, located approximately five kilometres along trend from the existing Ballinalack zinc-lead deposit (5.4 million tonnes of 7.6% zinc and 1.1% lead1 in the Inferred category; see news release dated November 28, 2018). Strongly anomalous zinc-lead mineralization was also intersected in the Navan Beds directly below the Ballinalack deposit (in addition to highly-elevated PGM-Cu-Ni-Co intercepts, as announced on January 14, 2020). Ballinalack is located approximately 50 kilometres west of Boliden’s Navan (aka ‘Tara’) zinc-lead mine (one of the largest zinc deposits in the world2).

“The latest drill results have been successful in identifying a new and very compelling zinc target at Ballycorkey with geological attributes similar to nearby zinc deposits at Navan and Ballinalack,” stated Bart Jaworski, CEO. “The Navan Beds are clearly underexplored at the Ballinalack property and significant discovery potential remains both regionally and near the existing resource.”

Details of Exploration Drilling at Ballinalack

In total, five (5) diamond drill holes (totalling 2,124 metres) were completed from early August to late November 2019, with all assays finalized in January and February 2020. Two of these holes were drilled near the Ballinalack deposit, whereas, the remaining three holes tested regional targets in the southern half of the property (see Exhibit 1), where Navan Beds are relatively shallow and have seen only limited historic exploration. In order to quantify the level of regional anomalism of zinc-lead in the Navan Beds, Group Eleven invested considerable effort into generating a comprehensive ‘grade-metre’ anomaly map of the property (see Exhibit 2). The following is a summary. 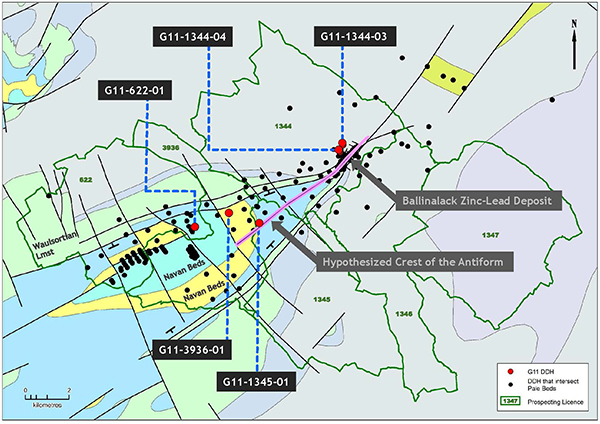 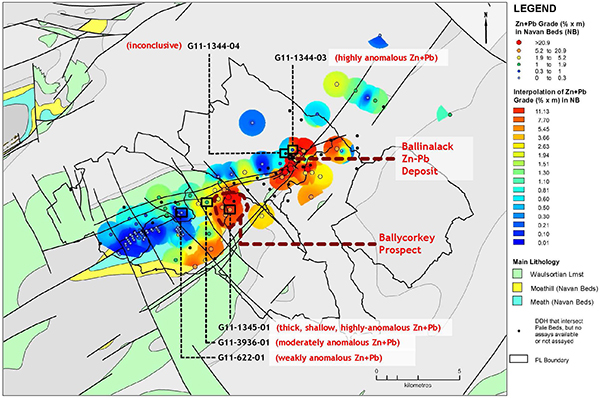 Note: ‘Grade-Metre’ map is generated by multiplying a combined zinc and lead percent grade by the width of the intersection in metres, and adding all such ‘grade x metre’ intercepts within the Navan Bed (aka ‘Pale Beds’) horizon. 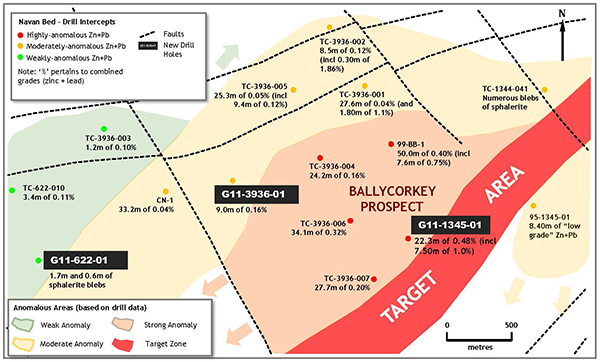 Over the last few months, the Company made a strategic decision to surrender five prospecting licenses (5) in the northern half of the Ballinalack project area, reflecting the fact that the target horizons are prohibitively deep (as interpreted from available seismic data). Concurrently, in order to protect the eastern extension of property, Group Eleven acquired a new license (PL 1347). This eastern area is prospective given (i) the suspected presence of increasingly large basin-bounding faults, (ii) the presence of chert in the area which may be of hydrothermal origin and (iii) the possible eastern extension of the recently announced PGM-bearing dyke.

Group Eleven looks forward to continuing to test the hangingwall Navan Beds under the existing Ballinalack deposit, while in parallel starting to define the shallower mineralization in the Navan Beds on the footwall of the Ballinalack fault, where historic step-out drilling intersected significant mineralization (e.g. 4.0 metres of 8.4% Zn+Pb3 and 1.4 meters of 20.4% Zn+Pb3), suggesting potential to expand the existing Ballinalack deposit.

The Company has also made great strides in reinvigorating regional exploration on this long-standing property, specifically in the shallower regional prospects to the south. Group Eleven looks forward to follow-up drilling at the Ballycorkey Prospect in due course.

Drill-core samples were prepared and assayed in the ALS Minerals Laboratory in Loughrea, Ireland. Samples were fine-crushed (CRU-31) to 70% < 2mm and pulverized and riffle-split to 85% < 75 µm. Zinc, lead and silver assays were obtained by multi-acid (4-acid) digestion/ICP-AES Package (48 Elements). Analytical accuracy and precision are monitored by the submission of one standard and 3 blanks inserted into the sample train of 65 samples by Group Eleven personnel. No duplicate samples were sent to the lab. ALS ran 5 blanks and 5 duplicates as part of their internal QC procedures.

About the Ballinalack Project

The Ballinalack project is a joint venture between Group Eleven (60% interest) and Shenzhen Zhongjin Lingnan Nonfemet Company Limited (40% interest), one of the largest zinc producers in China, and is located in Counties Westmeath and Longford, north-east Ireland. The property contains what is believed by the Company to be the third largest undeveloped zinc-lead occurrence in Ireland and is located approximately 50 kilometres west from the currently producing Navan (Tara) Zinc-Lead Mine (Boliden AB).

1 “NI 43-101 Independent Report on a Base Metal Exploration Project at Ballinalack, Co. Westmeath, Ireland” by Gordon, Kelly and van Lente, dated January 11, 2019.
2 Mineralization hosted on adjacent and/or nearby properties is not necessarily indicative of mineralization hosted on the Company’s property.
3 See Summary Table at the end of this News Release for a breakdown of individual zinc and lead grades.
4 Excluding assays from groove samples (small samples ground-off the side of drill core) which may be less reliable than traditional half-core samples.
5 Note, 99-BB-1 requires some caution given assays were derived from groove samples.