Group Eleven Announces Maiden Inferred Mineral Resource at Stonepark of 5.3Mt at 11.15% Zn+Pb; Open Along and Across Strike


Vancouver, B.C., April 17, 2018 – Group Eleven Resources Corp. (“Group Eleven” or the “Company”) is pleased to announce a maiden independent Mineral Resource estimate at its Stonepark zinc project in Ireland, of 5.3 million tonnes grading 11.15% Zn+Pb combined (8.55% zinc and 2.60% lead) in the Inferred Mineral Resource category (prepared in accordance with CIM guidelines; see Exhibit 1). The Mineral Resource estimate was prepared by CSA Global (UK) Ltd. (“CSA Global”) under contract to SLR Consulting Ireland (“SLR”) and was based on drilling conducted by Teck Resources Limited (the previous operator) from 2007 to 2011.

The deposit is relatively shallow (occurring at depths ranging from 190m to 395m) and consists of flat-lying, stratiform (1.0 to >7.5m thick) lenses of massive to semi-massive sphalerite, galena and pyrite hosted in thick (10 to >75m) hydrothermal alteration bodies (primarily black matrix breccia, or “BMB”) within the Waulsortian limestone. SLR and CSA Global comment that the Mineral Resource is open along and across strike and recommend additional step-out drilling to potentially augment the resource base.

“This maiden Mineral Resource marks a significant milestone for Group Eleven as it demonstrates not only very attractive grades in a global context, but also significant tonnage from an Irish perspective. Past producing Irish zinc mines, Tynagh and Galmoy, for example, were about 10 million tonnes in size” stated Bart Jaworski, CEO.

“At Stonepark, the relatively continuous and shallow nature of the Mineral Resource is particularly interesting given its immediate proximity to Glencore’s Pallas Green deposit – one of the largest undeveloped zinc deposits in the world. Pallas Green is substantially deeper than Stonepark. With the Stonepark resource still open along and across strike, five compelling regional targets within a 10km-radius of the Stonepark resource and several other targets on our adjacent PG West property, we view the maiden Mineral Resource at Stonepark as only an initial stepping stone towards unlocking the full potential of the Limerick Basin. The upcoming Tellus airborne survey over the Limerick and Silvermines region will be especially critical in helping to narrow down prospective structural corridors and greatly advance our regional ‘Big Think’ initiative.”

The Stonepark Mineral Resource estimate is contained within three main zones – Stonepark North, Stonepark West and Stonepark (see Exhibit 2 and 3). The bulk of the tonnage lies in the high-grade Stonepark North body which contains 4.0 million tonnes grading 11.95% Zn+Pb (9.10% zinc and 2.86% lead) and lies 190m to 240m below surface. The Mineral Resource was based on 88 diamond drill holes totalling 37,270m. 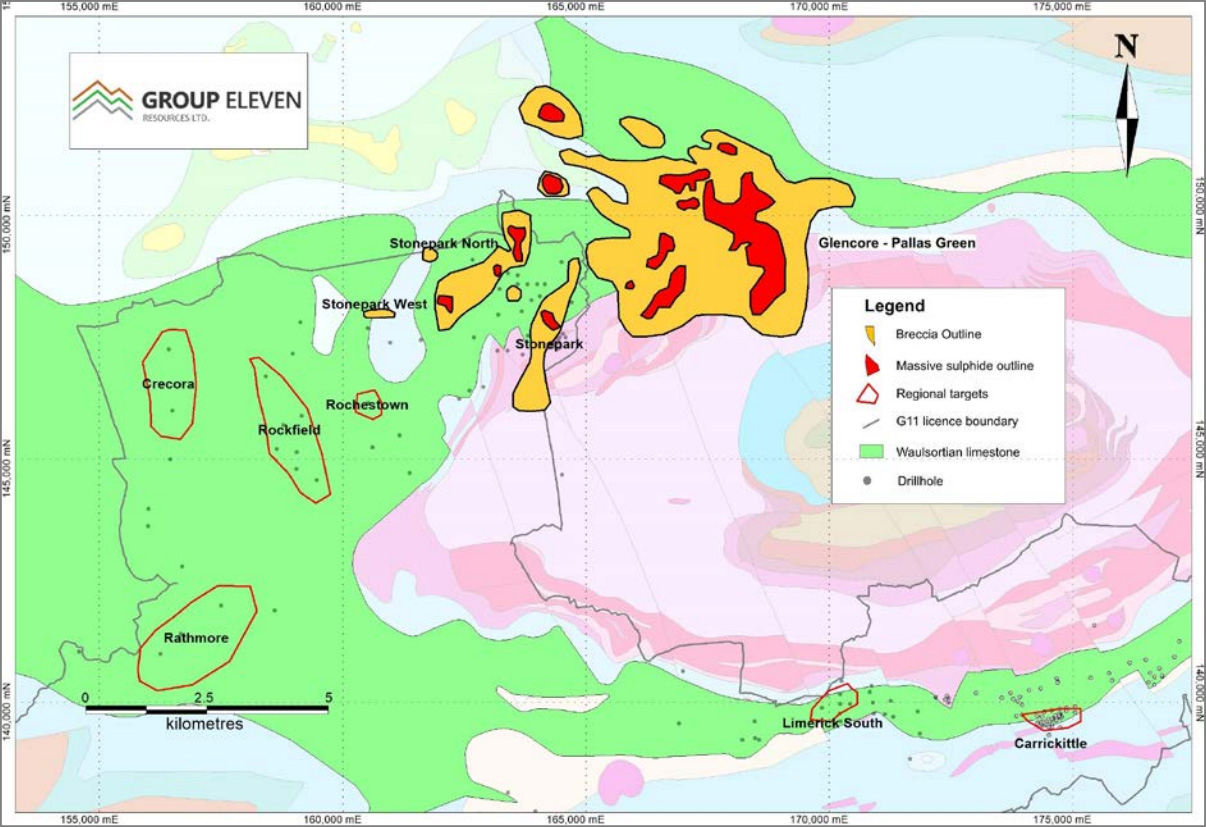 CSA Global states that the Stonepark deposit shows reasonable continuity of mineralisation within well-defined geological constraints. Drill holes are located at a nominal spacing of 100m on 100m sections extending out to 150m. The drill spacing is sufficient to allow the geology and mineralisation zones to be modelled into coherent wireframes for each domain. Reasonable consistency is evident in the orientations, thickness and grades of the mineralised zones.

Regional targets on the remainder of the Stonepark property consist of Crecora, Rockfield, Rochestown, Rathmore and Limerick South (see Exhibit 3). On Group Eleven’s adjoining PG West property (100% interest; over 1,000 sq km), the most advanced regional targets thus far consist of Carrickittle/Oola, Tipperary and NewcastleWest. As previously announced, Group Eleven is participating in an upcoming Tellus airborne survey (24,700 line km / Magnetics, EM and Radiometrics / starting May 2018), which will cover the Company’s Stonepark/PG West and nearby Silvermines properties.

The Stonepark project is a joint venture between Group Eleven (76.56% interest) and Connemara Mining Company plc (23.44% interest; trading symbol: CON-AIM). The updated NI 43-101 technical report on the Stonepark project will be published and submitted to SEDAR within 45 days.

The Pallas Green deposit is located approximately 1km to the east of Group Eleven’s Stonepark project (see Exhibit 3). As per Glencore’s Resources & Reserves report (dated December 31st, 2017), the Pallas Green deposit contains an Inferred Mineral Resource totalling 44.2 million tonnes grading 8.4% Zn+Pb (7.2% zinc and 1.2% lead), up year-over-year from 44.0 million tonnes grading 8.0% Zn+Pb (7.0% zinc + 1.0% lead). The deposit occurs over an area 4,000m by 4,000m, and from 300m to 1,300m below surface. The resource estimate is based on 392,000m of diamond drilling in 775 drill holes completed between 2002 and the end of 2017. Drill spacing is nominally 100m, but 178 infill drill holes at 50m spacing have been completed. Drilling resumed at Pallas Green in May 2017, following suspension in July 2014. New drilling totalled 15,060m in 23 drill holes. All but two of these were directional cuts from existing drill holes for a total of 28,350m of effective drilling. All drill holes continued a 100m spaced program aimed at basic delineation of the Caherline Zone, which was discovered in 2012. The Caherline Zone is deeper than the rest of the resource estimate, but has better than average grade, presently 9.9 million tonnes grading 10.1% Zn+Pb (8.7% zinc and 1.4% lead).

Group Eleven’s ongoing initial phase drill program is progressing well. At Stonepark, drilling began last week. The Company intends to release results from Ballinalack and Stonepark drilling over the next few weeks upon completion of logging, sampling and assaying of core.

The Company is pleased to announce the appointment of Dr Mark Holdstock as Project Manager, reporting to David Furlong, COO. Mark is a Professional Geologist with over 30 years exploration experience including Noranda, Billiton, Outokumpu, Boliden and Tara Mines. At Tara, Mark led the team that discovered the 20Mt+ SWEX extension to the world class Navan Zn-Pb orebody in Ireland. Mark has published a number of academic papers on carbonate-hosted zinc deposits. Most recently, Mark was Managing Director at Ireland-based Aurum Exploration Services, a position he held since 2005.

Group Eleven recently commenced trading on the Frankfurt Stock Exchange under the symbol “EG3”. In conjunction with this listing, the Company has entered a market-making agreement with ACON Actienbank AG, based in Munich, Germany. In consideration for the services provided, the Company has agreed to pay a semi-annual fee in the amount of 12,000 Euros plus value-added tax (if applicable). Group Eleven and ACON are unrelated and unaffiliated entities. ACON has no interest, directly or indirectly, in the Company or its securities, or any right or intent to acquire such an interest. The capital and securities required for any trade undertaken by ACON as principal will be provided by ACON.

Dr Belinda van Lente, a Qualified Person as defined by NI 43-101, independent of the Company, has reviewed and approved the scientific and technical information as related to the preparation and reporting of the maiden Mineral Resource set out in this news release. Dr van Lente is a resource geologist with over 13 years of industry experience, both in a consulting and production environment. Her experience includes Mineral Resource Estimates and audits on various commodities. She has extensive experience in the practical application of estimation methods, standards and procedures used in the creation and declaration of Mineral Resource estimates and is a Member of the Geological Society of South Africa (GSSA) and the South African Council for Natural Scientific Professions (SACNASP).

CSA Global’s Qualified Person has reviewed the QA/QC data and considers the data to be fit-for-purpose to support reporting of a Mineral Resource in accordance with NI 43.101.

This press release contains statements regarding the Pallas Green Mineral Resource estimate by Glencore plc. Such statements are obtained from publicly available sources and are provided for informational purposes only. The results within the report referenced are not meant to be indicative of the results and findings of the Company’s Stonepark property.”

This press release contains forward-looking statements within the meaning of applicable securities legislation. Such statements include, without limitation, statements regarding the future results of operations, performance and achievements of the Company, including the timing, content, cost and results of proposed work programs, the discovery and delineation of mineral deposits/resources/ reserves and geological interpretations. Although the Company believes that such statements are reasonable, it can give no assurance that such expectations will prove to be correct. Forward-looking statements are typically identified by words such as: believe, expect, anticipate, intend, estimate, postulate and similar expressions, or are those, which, by their nature, refer to future events. The Company cautions investors that any forward-looking statements by the Company are not guarantees of future results or performance, and that actual results may differ materially from those in forward looking statements as a result of various factors, including, but not limited to, variations in the nature, quality and quantity of any mineral deposits that may be located. All of the Company's public disclosure filings may be accessed via www.sedar.com and readers are urged to review these materials, including the technical reports filed with respect to the Company's mineral properties, and particularly the technical report entitled “NI 43-101 Independent Report on the Zinc-Lead Exploration Project at Stonepark, Co. Limerick, Ireland” with an effective date of November 20, 2017 by John Kelly and Paul Gordon (SLR Consulting Ireland) with respect to the Stonepark Property.