“We are excited to see such robust numbers coming from Tullacondra, especially with grades over 5% copper and 600 g/t silver,” stated Bart Jaworski, CEO. “It is significant that a previously unknown zone of mineralization, now representing the strongest zone of copper on the property, has been discovered within the Old Red Sandstone – a lithological unit not typically the focus of much attention in Ireland. Tullacondra is trucking distance from our key zinc and copper-silver prospects at the nearby PG West and Stonepark Projects and we look forward to unlocking further shareholder value as our ongoing 2022 drill program (over 6,000m and two rigs) progresses and now transitions to include Ballywire.” 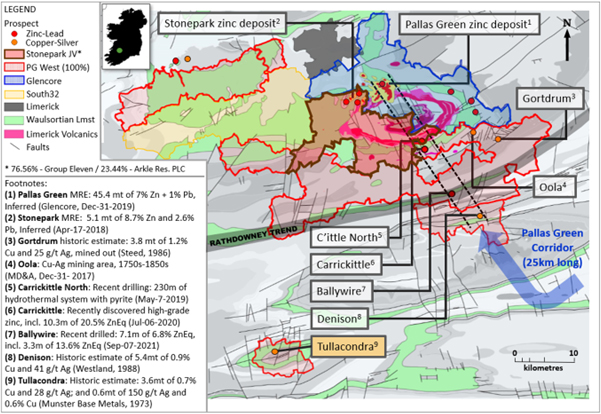 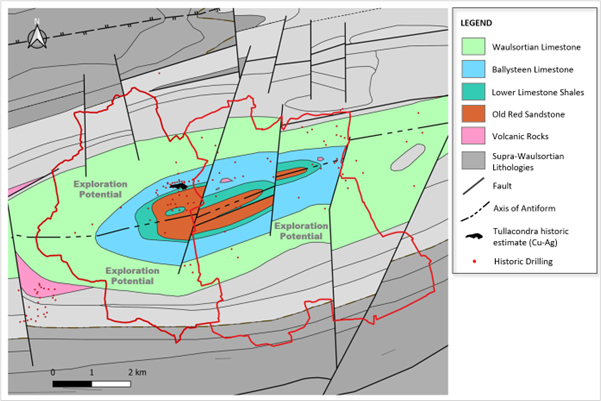 Bornite and chalcocite-tennantite dominate the centre of mineralized interval yielding the highest grades; whereas, the margins are dominated by chalcopyrite (see Exhibit 5). Most of the mineralisation is within bedding-parallel veins, albeit, some veins are cross-cutting at nearly right angles. The average dip of the main veins is estimated at 60°. Separately, weakly anomalous levels of cobalt were also returned in the assay results, assumed to be of little significance at this time. 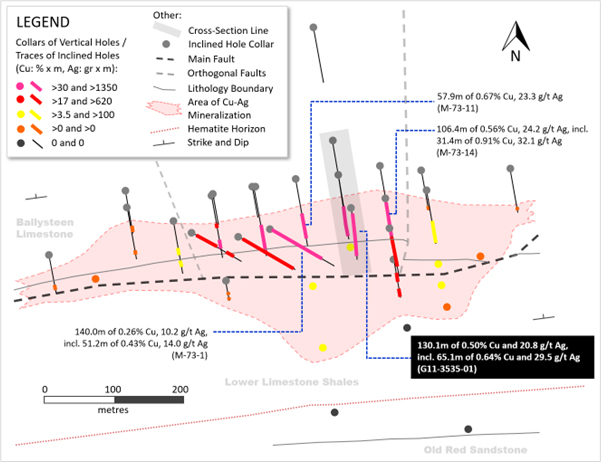 Note: Secondary Fault parallel to the Main Fault (see Exhibit 5) is not shown above

Mineralization in G11-3535-01 is significantly wider than in the two closest historic holes collared approximately 50m to the north and south, respectively (see M-73-12 and M-75-32 in Exhibit 5). G11-3535-01 also confirms the continuity of robust, near-vertical Cu-Ag mineralization intersected in historic intervals located over 50m to the east and west, respectively (see Exhibit 3). 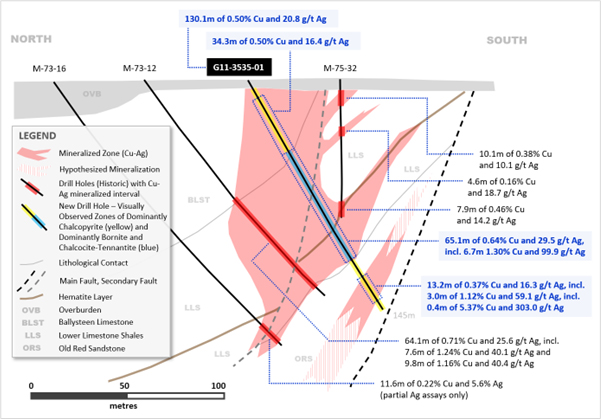 Note: True thickness for the above holes is currently unknown; “unk” means not assayed

Although historic intercepts at the currently defined edges of the historic estimate1 at Tullacondra appear to show the mineralizing system waning, the mineralized body nevertheless remains open in most directions (see Exhibit 3). Strong potential also exists to find look-alike bodies elsewhere on the property, especially in areas of similarly intense east-west faulting.

The mineralized body at Tullacondra is predominantly hosted within the Lower Limestone Shales and the Ballysteen Limestones (see Exhibit 5), however, the newly identified zone (13.2m of 0.37% Cu and 16.3 g/t Ag) occurs within the typically less explored Old Red Sandstone (“ORS”) horizon. While other intercepts of ORS-hosted Cu-Ag mineralization exist on the property, they are rare (only a few) and weaker than the above intercept. This opens the possibility that (a) much of the historic drilling was not drilled sufficiently deep to intersect this target (see hypothesized mineralization in Exhibit 5); and (b) further underexplored potential exists elsewhere on the property to discover ORS-hosted mineralization, proximal to faulting. Interestingly, two historic holes drilled 470m apart and over 300m to the south of the southern edge of the mineralized body interested 42.7m of 0.14% Cu (M-73-23) and 9.2m of 0.17% Cu (M-73-25), respectively. Both of these intercepts were hosted within the ORS and increasingly proximal to the east-west axis of the Tullacondra antiform (see Exhibit 2).

Zinc potential also exists at Tullacondra within the Waulsortian Limestone which is preserved on the property (see Exhibit 2) and underlain by stratigraphically-lower, copper-bearing horizons. Overall, follow-up drilling at Tullacondra is strongly warranted. The Company aims to provide an update over the near-medium term on the potential next phase of exploration at the project.

Group Eleven inserts certified reference materials (“CRMs” or “Standards”) as well as blank material, to its sample stream as part of its industry-standard QA/QC programme. The QC results have been reviewed by the Qualified Person, who is satisfied that all of the results are within acceptable parameters.

Technical information in this news release has been approved by Paul Gordon, P.Geo., geological consultant at SLR Consulting, and independent ‘Qualified Person’ as defined under Canadian National Instrument 43-101.