“We are excited to begin our drill hole at Carrickittle North, targeting similar structure and geology to Glencore’s Pallas Green zinc deposit, located less than 10 kilometres along trend to the north. We also very much look forward to conducting our long-awaited drilling at Tullacondra,” stated Bart Jaworski, CEO. “With strong, near-surface copper-silver mineralization over hundreds of metres of strike, Tullacondra has been in our sights for a long time. Aside from trying to find look-alike zones of mineralization in the neighbourhood, it is equally intriguing that the prospect’s potential for cobalt has never been advanced and yet, may provide a brand-new avenue for exploration on the property.”

Background Information on the Tullacondra Prospect at the PG West Project (100%-interest), Ireland

The Tullacondra prospect is located approximately 20km south of the Company’s PG West project (see Exhibit 1). Group Eleven applied for the Tullacondra property in early 2020 and was granted the prospecting licenses in Sept 2020. The prospect shares similarities to Group Eleven’s Gortdrum, Denison and Oola Cu-Ag prospects, especially given that mineralization appears to be related to volcanics. Located 1km to the east of the Tullacondra historic estimate, for example, an exposure of pyroclastic volcanic material (see Exhibit 2) is believed to represent a larger volcanic vent breccia, with the age of volcanism believed to be similar to that at Group Eleven’s Stonepark and PG West projects.

The copper-rich zone occurs as a near-vertical body (see Exhibit 3) approximately 25-40m thick, extending from near-surface to a vertical depth of at least 120m and extending for a strike length of 370m in an E-W orientation. Mineralization is composed predominantly of bornite and chalcopyrite (occurring as small veins, disseminations and blebs) and mostly hosted in carbonate (limestone) lithologies above the Old Red Sandstone (albeit, some mineralization appears to also occur deeper in the stratigraphy).

The silver-rich zone occurs as a gently-dipping, strata-bound horizon (see Exhibit 3; approximately 5-10m thick, 300m strike length, 250m dip extent), occurring at the base of the copper-rich body. Mineralization consists predominantly of tennantite-tetrahedrite and native silver (highest grade attained historically was 426 g/t Ag over 1.5m). The silver-rich horizon occurs along a distinctive hematite-bearing (iron oxide rich) marker horizon. This horizon is about 30cm thick, albeit varies in thickness, and is observed throughout the property.

In 2012, a previous operator focussing on Cu-Ag exploration, drilled five regional holes within several kilometres of the historic estimate, intersecting the hematite horizon within three of the holes (the two others were abandoned prior to reaching the hematite horizon). XRF analysis was conducted on portions of each hole (X-ray fluorescence is a quicker and less expensive alternative to traditional laboratory assay).

Two of these holes returned strongly elevated cobalt levels. ‘AM08’ returned a 6.5m zone (starting at a downhole depth of 15.0m) with consistently elevated cobalt readings generally ranging between 100-510 ppm, with a high of 1434 ppm Co; whereas, ‘AM09’ returned much spottier readings, albeit, containing two strong kicks of 1,086 ppm Co and 8,102 ppm Co at a depth of 18.00m and 19.5m, respectively3. Given the XRF program was quite limited (restricted to the first several metres of each hole), the above readings were inadvertently collected proximal to the hematite horizon, but not at the hematite horizon itself.

Given the low prices at the time, cobalt was not a focus. Similarly, the Tullacondra historic estimate has never been analysed for cobalt (historic assays consist only of Cu, Ag, Zn and Pb). Further work is required to determine the nature and extent of cobalt mineralization on the property and to determine if such mineralization might be present at the historic estimate, within the hematite-layer and/or potentially elsewhere on the property. 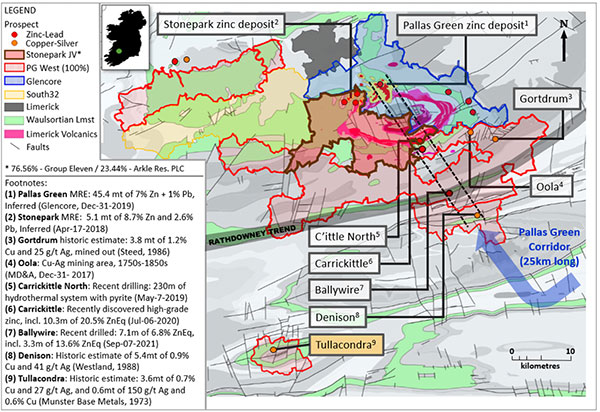 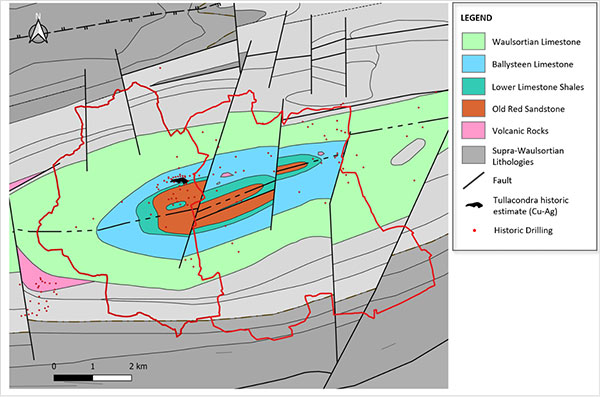 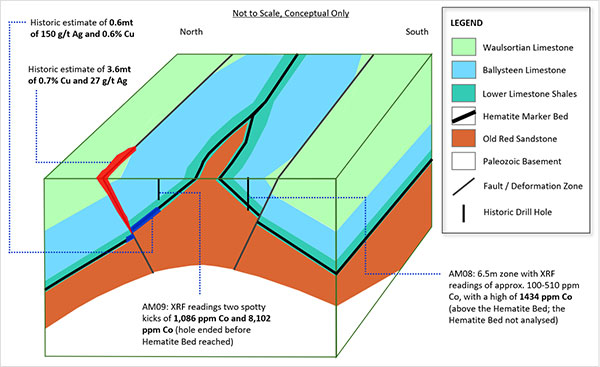 Technical information in this news release has been approved by Paul Gordon, P.Geo., geological consultant at SLR Consulting, and independent ‘Qualified Person’ as defined under Canadian National Instrument 43-101.