“We’re delighted with this better-than-expected drill result at Denison which clearly illustrates the prospectivity of the Pallas Green Corridor and specifically Group Eleven’s Denison, Tullacondra and Gortdrum copper-silver prospects in the Limerick region,” stated Bart Jaworski, CEO. “While the Carrickittle and Ballywire zinc prospects remain our top priorities at the PG West project, we have now confirmed that strong copper-silver mineralization can be spatially associated with Limerick zinc systems, opening up significant new exploration opportunities for our shareholders.”

G11-4474-01 (collar azimuth of 360°, dip of -80° and depth of 203.0m) was located on the eastern side of the Denison historic estimate3. Mineralization is contained within an area of approximately 600 metres in strike length and occurring along an arc-shaped shear zone generally oriented in an east-west direction (see Exhibit 1). 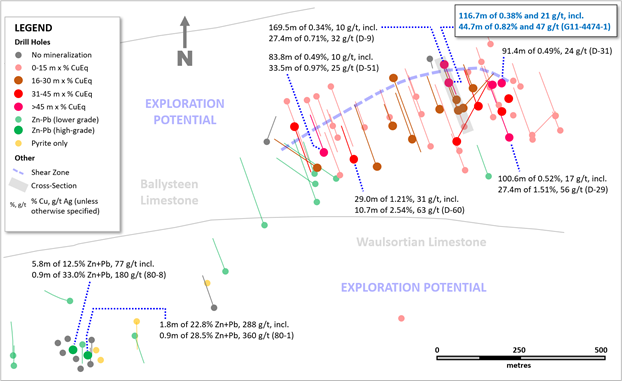 Note: “Zn-Pb (lower grade)” means either minor sphalerite (zinc mineral) and/or galena (lead mineral) was observed in core but not assayed or was assayed but returned low levels (below 2.0% Zn and Pb combined over any interval) and in all cases (with one minor exception), no assays were run for copper; “Zn-Pb (high-grade)” pertains only to holes 80-1 and 80-8

The key aim of G11-4474-01 was to (a) confirm presence of previously known mineralization (part of the Denison historic estimate1); (b) provide physical core from the prospect (given almost no historic core exists intact) and (c) identify the extent and characteristics of all mineralization (including structural information from oriented core).

The hole succeeded in the above objectives and intersected 116.7m of 0.38% Cu and 21 g/t Ag (0.54% CuEq), including 44.7m of 0.82% Cu and 47 g/t Ag (1.16% CuEq) (starting near-surface at 4.0m downhole depth; true width is estimated at 74%). The intercept also expanded by 30-50m the outer-boundary of the assayed lower-grade envelope (approx. 0.12% Cu and 5.4 g/t Ag or 0.16% CuEq) now interpreted at this locality (see Exhibit 2 and 3). Mineralization predominantly consists of chalcopyrite, with lesser bornite and tennantite. Malachite is relatively common along joint surfaces. 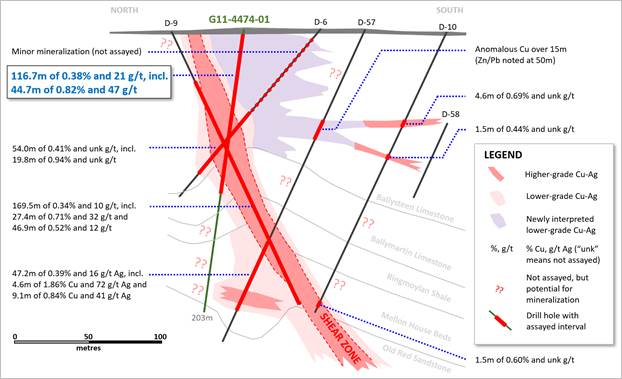 A summary of assay results from G11-4474-01 is shown below (see Exhibit 3), while historic assays from some of the strongest historic holes are shown in Exhibit 4.

From the Company’s experience at Carrickittle, Ballywire and other prospects in the Limerick region, it appears possible that extensions of the mineralized EW-trending shear zone may exist at Denison, along with other prospective fault orientations. In addition, the zinc-bearing zone is also compelling given its extent, geometry and relationship with the Cu-Ag mineralization is not yet well established (note, the high-grade zinc intercepts above bear similarities to those at Carrickittle). Further work is warranted to refine the Company’s exploration model.

Denison is located 25 km along the Pallas Green Corridor from Glencore’s Pallas Green zinc deposit, as well as, 6 km and 12 km from the Company’s Ballywire and Carrickittle zinc prospects, respectively (see Exhibit 5). The Denison prospect was discovered in 1965 (by Denison Mines Limited). Approximately 18,430 metres were drilled at the prospect prior to Group Eleven (1965 to 1988) by several operators, predominantly at the historic estimate1. The area was never mined and continues to be a greenfield prospect.

Note: As a percent of the drilled interval, true thickness is estimated to be 74%; “CuEq” means copper-equivalent, combining Cu and Ag into a single comparable number and is calculated from metal prices (US$) as follows: $3.00/lb Cu and $15.00/oz Ag

Note: True thickness for the above holes is currently unknown; “CuEq” means copper-equivalent, combining Cu and Ag into a single comparable number and is calculated from metal prices (US$) of $3.00/lb Cu and $15.00/oz Ag; “unk” means not assayed

The Company views the above results as encouraging and follow-up in due course is warranted. At the Croom prospect (see Exhibit 5), two holes were drilled (to depths of 103m and 195m) to define regional stratigraphy. The implications of the holes within the structural setting of the area were significant, pointing to a sizeable fault structure in the area. More work is warranted to further refine this prospect. 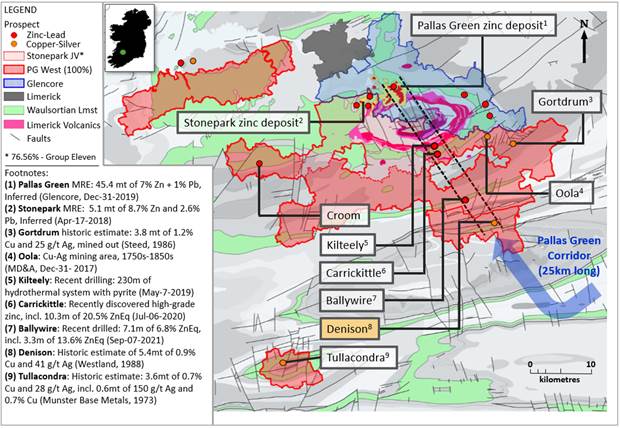 Drill-core samples were prepared and assayed in the ALS Minerals Laboratory in Loughrea, Ireland. Samples were fine-crushed (CRU-31) to 70% < 2mm and pulverized and riffle-split to 85% < 75 µm. Zinc, lead and silver assays were obtained by multi-acid (4-acid) digestion/ICP-MS Package (48 Elements), with ore-grade samples analysed using multi-acid ICP-AES. Analytical accuracy and precision are monitored by the submission of 2 standards and 2 blanks inserted into the sample train of 122 samples by Group Eleven personnel. ALS analysed 2 blanks, 14 duplicates and 7 standards as part of their internal QC procedures.