Vancouver, Canada, September 28, 2021 - Group Eleven Resources Corp. (TSX-V: ZNG; OTC: GRLVF; FRA: 3GE) (“Group Eleven” or the “Company”) is pleased to announce that the recently completed ground magnetics survey at the Carrickittle zinc prospect (“Carrickittle”) within its 100%-owned PG West project (“PG West”), Ireland, has identified prominent magnetic lineaments extending from Zone 1 and 2 towards the NW, parallel to massive sulphide bodies identified via drilling over the last year. These lineaments are interpreted to represent a highly-prospective fault zone which forms an immediate and primary target in the upcoming drill campaign. In addition, ongoing drilling at Zone 3 and 4 is now complete with assays expected over the next several weeks.

“We’re very pleased that the ground magnetic survey at Carrickittle has significantly enhanced our exploration model of the area and provided a very strong roadmap for our upcoming, fully funded drill campaign along the 1-kilometre-long NW extension,” started Bart Jaworski, CEO.

“We have several key targets to test, the most immediate of which is the prominent NW-trending set of magnetic linears extending from Zones 1 and 2. We are also very keen to investigate other prominent linears (not only NW-trending, but also trending NE), suspected diatremes and alteration zones, as well as, several historic holes which intersected up to 61% zinc and lead in massive sulphide up to 1 km away from Zone 1. The start of drilling on the NW extension is coming soon and will be an exciting time for the Company.”

Fieldwork for the ground magnetic survey was conducted on behalf of the Company by BRG Ltd. from June 28th to July 15th, 2021. Data was processed by Dr Hernan Ugalde at Dip Geosciences. The survey covered 1.4 km by 1.4 km, extending from Zones 1 to 4, northwards towards the Kilteely prospect at the edge of the Limerick Volcanic Complex (see Exhibit 1, 2 and 3). Survey lines were north-south oriented and closely spaced (25-metres apart) to optimize detail on structural trends. The survey totalled 80 line-kilometres.

Faults are known to be important controls on zinc mineralization in Ireland. The primary aim of the survey was to determine if prominent faults are present in the area, and if so, their orientation. Specifically, the survey measured the magnetic susceptibilities of below-ground rock layers. The Waulsortian Limestone is fairy clean and devoid of iron-magnesium (Fe-Mg) minerals, hence is largely invisible to the survey. In contrast, the underlying Argillaceous Bioclastic Limestone (“ABL”) contains abundant Fe-Mg minerals which have significant magnetic susceptibilities. Proximity to the ABL typically generates a stronger signal. Hence, it was postulated the survey would be able to detect faults which moved the ABL closer or further to surface. 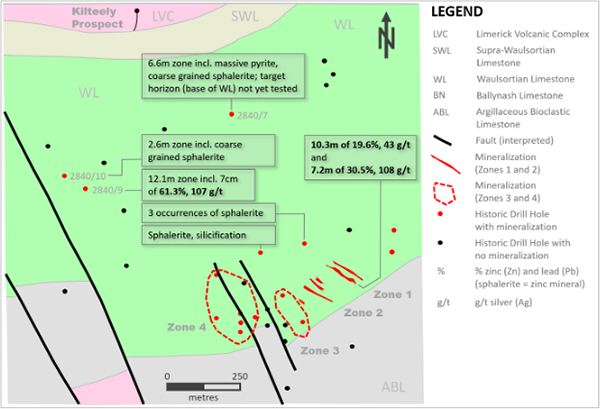 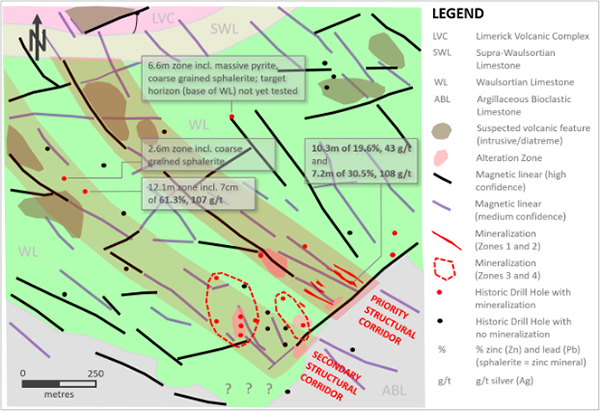 Key changes from ‘before’ to ‘after’ geological maps include:

The new observations and interpretations, as described above, are based on the underlying ground magnetics data as shown in Exhibit 3. 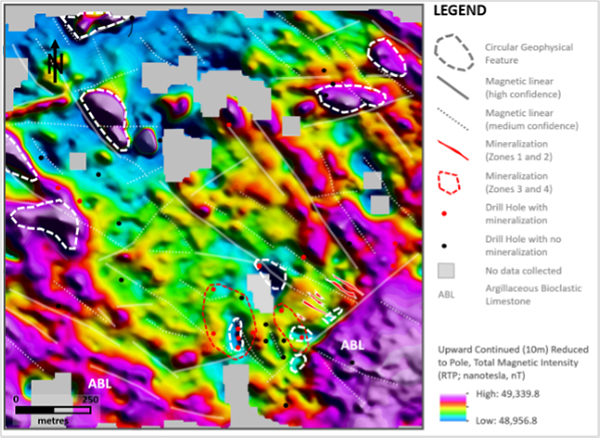 The level of prominence of each magnetic linear was determined by comparing three derivatives of Total Magnetic Intensity: (a) reduced-to-pole (“RTP”); (b) RTP first derivative; and (c) RTP tilt derivative. Those lineaments which were prominent in all three derivates of the data were deemed ‘high confidence’, while those which occurred in only one or two were deemed ‘medium confidence’ (see Exhibit 3). One of the most prominent and lengthy features from the above exercise was the linear that occurs along Zone 1 and 2 (see ‘Priority Structural Corridor’ in Exhibit 2). Note, Exhibit 3 shows only the RTP image and as such, certain features may not show as strongly as it would on the three images overlaid.

The Company aims to test the ‘Priority Structural Corridor’ (see Exhibit 2), taking 30-50m (or more) step-outs along the NW trend from known drill pierce points in Zone 1; and in parallel, drilling several larger step-out holes along this trend. Group Eleven may also test, at least in part, the circular features, follow up on historic holes which intersected massive sulphide and test the orthogonal NE faults. The above program has not yet been finalized; however, the Company aims to provide more information upon the start of drilling in several weeks.

For reference, the Carrickittle prospect is located within the Company’s 100%-owned PG West project in southwestern Republic of Ireland (see Exhibit 4). 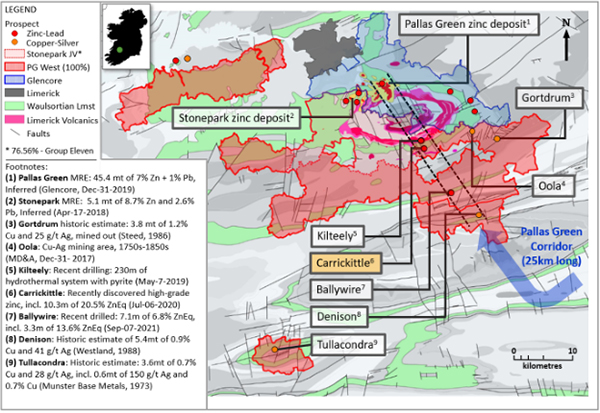