“We are zeroing in on the prize as we learn more about Carrickittle and the broader 25-kilometre-long Pallas Green Corridor,” stated Bart Jaworski, CEO. “A more robust and complete picture is starting to emerge and we are excited to start the next phase of drilling at Carrickittle this summer. The immediate focus will be on Zones 3 and 4, where the prospectivity is materially higher than Zone 2; followed by the 1-kilometre-long corridor to the NW which remains wide-open and increasingly prospective.”

Eight holes totalling 920 metres were completed as part of the Company’s maiden drill campaign at Zone 2 of the Carrickittle prospect (see Exhibit 1 and 2). All but one hole intersected meaningful zinc-lead mineralization. For reference, the Company’s previous drilling at Zone 1 (completed in November 2020) consisted of nine holes totalling 880 metres.

G11-2840-13, -14, -15, -16 and -19 were drilled to test chargeability-high anomalies along IP lines 2, 3 and 4, respectively (see Exhibit 2). G11-2840-18 and -20 were drilled in the opposite direction to the initial holes in order to intersect the newly interpreted mineralized veins perpendicular to dip and to conduct a definitive test for massive sulphide bodies which may have been sub-parallel to the initial holes. G11-2840-17 was drilled to better understand the relationship between historic intercepts in P4 and P25.

IP chargeability-high anomalies (for more details, see news release dated February 22, 2021) may be explained by the presence of a series of narrow mineralized veins with associated pyrite. Note, massive sulphides at Zone 1 did not appear to yield any extensive IP anomalies.

It is worth noting that hole G11-2840-19 intersected anomalous mineralization (1.8 metres of 0.3% zinc + lead) at the base of the Waulsortian limestone. This is encouraging given the intercept approaches (within 20-30 metres) the postulated NW extension of massive sulphides at Zone 1, projected approximately 75 metres along strike from the last drilling in the area (see Exhibit 2). 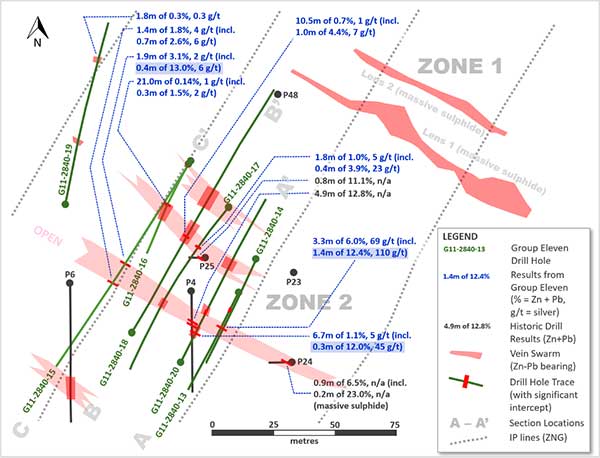 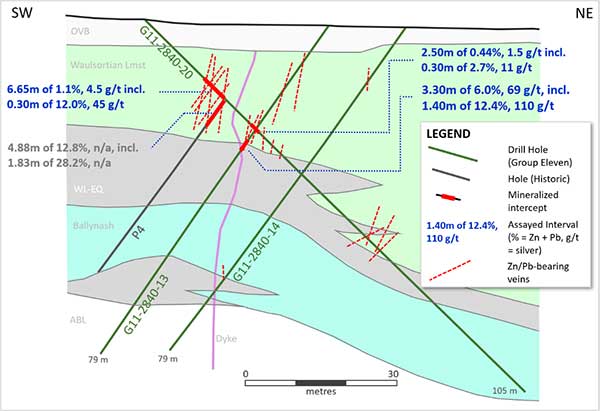 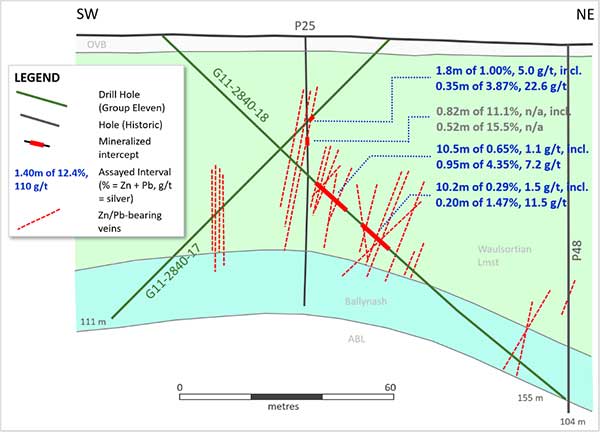 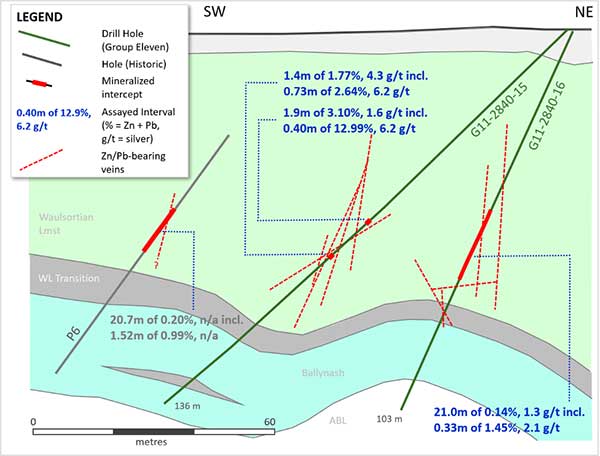 Next Steps at Carrickittle and Other Prospects at PG West, Ireland

The rig is now drilling at the Croom prospect (PG West; see Exhibit 8) where two short holes (totalling 300 metres) are scheduled over the next few weeks. Drilling is then planned consecutively for the Ballywire (a prospect with similarities to Carrickittle), Denison and Oola prospects (PG West; 250 metres, 300 metres and 150 metres, respectively). Drilling at Carrickittle is expected to resume this summer. Initial focus will be on Zone 3 and 4, before moving on to the 1-kilometre-long projected extension to the NW.

As previously stated (see news release dated January 28, 2021), the Company estimates it will be able to drill approximately 5,000 metres in 2021 (fully-funded). Taking the above prospects (approximately 1,000 metres) and the 1,301 metres drilled to date this year, leaves approximately 2,700 metres for drilling at Carrickittle (approximately 3x the amount drilled at Zone 2).

It is important to note that prospectivity of Zones 3 and 4 appears to be materially higher relative to Zone 2 based on three key factors: (i) stronger historic drill results (measured by ‘metres x ZnEq%’); (b) the presence of a large fault which is NW-trending and intensely dolomitized (alteration product associated with zinc in Ireland); and (c) the presence of copper (chalcopyrite and malachite are noted in two historic holes in Zone 4; copper is typically interpreted as being proximal to higher-grade zinc-lead feeder zones in Ireland) (see Exhibit 7). 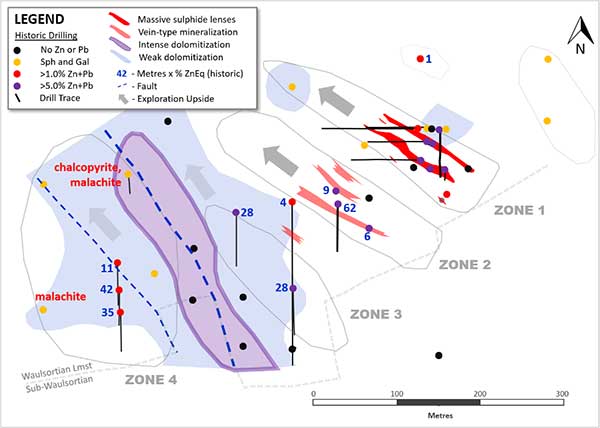 Note: Chalcopyrite and malachite are copper-bearing minerals; ‘Metres x ZnEq’ is calculated by multiplying the length of a historic drill interval (metres) by the grade (Zinc Equivalent %) of that interval 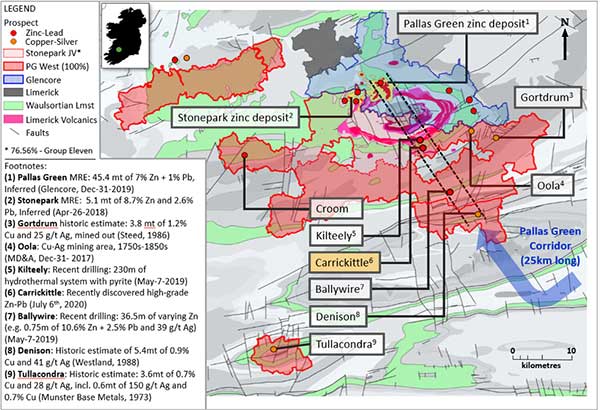 Drill-core samples were prepared and assayed in the ALS Minerals Laboratory in Loughrea, Ireland. Samples were fine-crushed (CRU-31) to 70% < 2mm and pulverized and riffle-split to 85% < 75 µm. Zinc, lead and silver assays were obtained by multi-acid (4-acid) digestion/ICP-MS Package (48 Elements), with ore-grade samples analysed using multi-acid ICP-AES. Analytical accuracy and precision are monitored by the submission of 8 standards and 9 blanks inserted into the sample train of 302 samples by Group Eleven personnel. ALS analysed 46 blanks, 165 duplicates and 157 standards as part of their internal QC procedures.