“We are delighted that, despite a modest budget and limited metres drilled, the step-out drill program at Stonepark has intersected robust mineralization beyond the boundary of the current mineral resource estimate,” stated Bart Jaworski, CEO. “The two holes drilled at Stonepark provide us with clear resource expansion potential at Stonepark North and strong vectors for follow-up work at Stonepark West. Further expansion drilling is strongly warranted.” 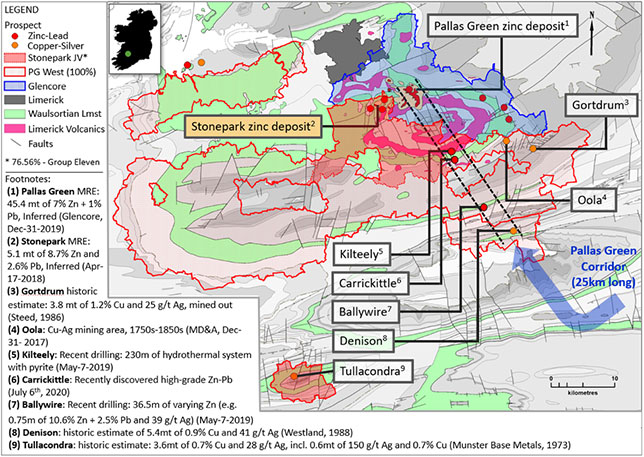 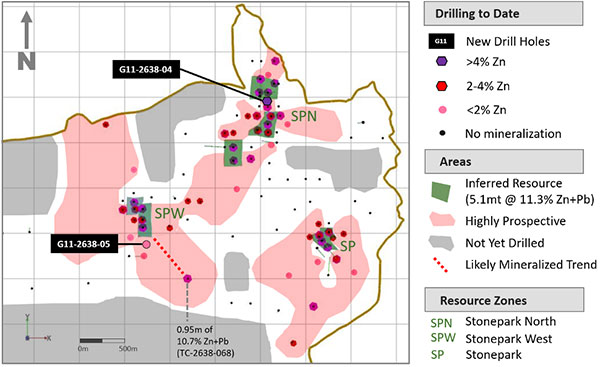 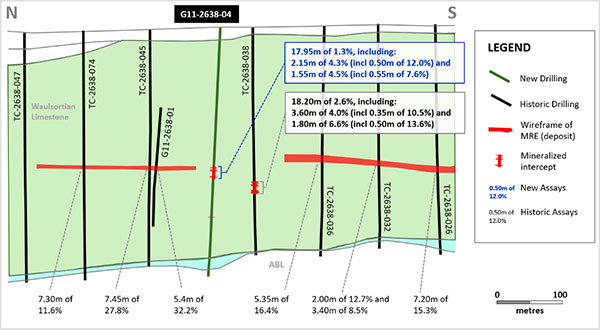 Note: The wireframe for the resource was estimated as per a Technical Report dated April 26, 2018 (and hence, for avoidance of doubt, was estimated prior to the drilling of hole G11-2638-04).

For reference, the wireframes defining the MRE (as estimated in the Technical Report on Stonepark dated April 26, 2018; see Exhibit 3) were constructed using a minimum true thickness of 2.0 metres, at 2.0% zinc and lead natural cut-off (with average grades calculated using mineralized blocks at a cut-off of 4.8% zinc equivalent grade). Mineralized wireframes were extended to a maximum of 100 metres beyond any drill hole. Based on the above, management believes that the mineralization in G11-2638-04 and the resulting tightened hole spacing are likely to be sufficient to extend the wireframe of the MRE when a full MRE update study is completed at some point in the future.

The second hole drilled at Stonepark was G11-2638-05, located near the Stonepark West portion of the MRE. This hole intersected moderate mineralization (2.0 metres of 1.21% zinc and trace lead or 1.21% combined from 451.00 metres; and a number of lower grade intercepts elsewhere in the hole).

The above intercept confirms the presence of the mineralized system at this locality and suggests the focus of further exploration for higher-grade and wider mineralization should be further to the east, along trend towards historic hole TC-2638-068 (0.95 metres of 9.01% zinc and 1.69% lead, or 10.70% combined from 423.80 metres) located 585 metres to the southeast (see red dotted line in Exhibit 2). Further drilling is strongly warranted.

Drill-core samples were prepared and assayed in the ALS Minerals Laboratory in Loughrea, Ireland. Samples were fine-crushed (CRU-31) to 70% < 2mm and pulverized and riffle-split to 85% < 75 µm. Zinc, lead and silver assays were obtained by multi-acid (4-acid) digestion/ICP-MS Package (48 Elements), with ore-grade samples analysed using multi-acid ICP-AES. Analytical accuracy and precision are monitored by the submission of 3 standards and t3 blanks inserted into the sample train of 89 samples by Group Eleven personnel. ALS analysed 10 blanks, 16 duplicates and 29 standards as part of their internal QC procedures.