Vancouver, Canada, November 3rd, 2020 - Group Eleven Resources Corp. (TSX.V: ZNG; OTC: GRLVF; FRA: 3GE) (“Group Eleven” or the “Company”) is pleased to announce results from regional drilling at the Company’s 100%-interest PG West zinc project (“PG West”) in the Republic of Ireland. The Company also notes that drilling at the Carrickittle prospect at PG West is proceeding on schedule and results are expected over the coming weeks.

“This latest batch of drilling was largely reconnaissance in nature, and yet still managed to add significant evidence of prospectivity to three regional targets within our PG West project,” stated Bart Jaworski, CEO. “The drilling at Kilteely has the most immediate impact given the newly identified fault may have positive implications for our exploration efforts along the Carrickittle-Kilteely section of the Pallas Green Corridor.”

Five holes (totalling 1,053 metres) were completed on early-stage regional targets within PG West. Drilling was conducted in part to fulfil licence expenditure requirements (i.e. to keep the ground in good standing) but also to grow the Company’s pipeline of refined prospects across the Limerick Basin. 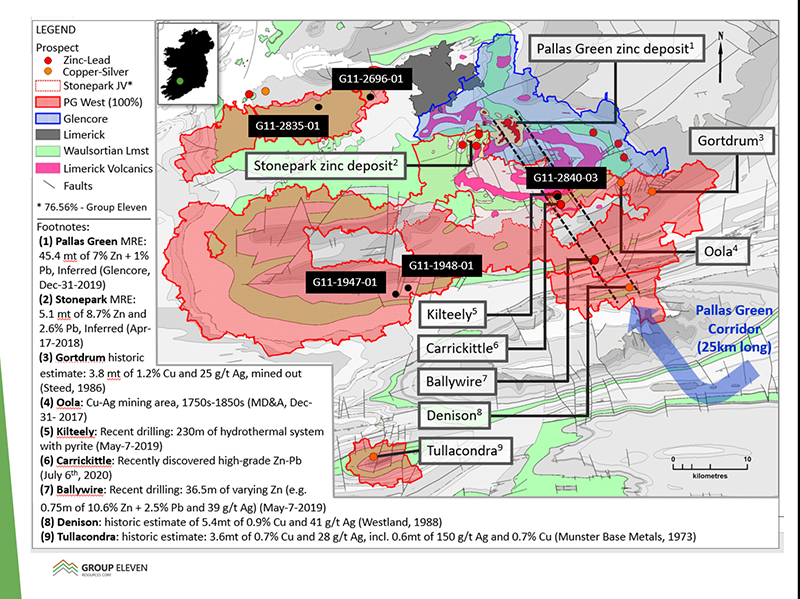 One drill hole (G11-2840-03) was drilled at the Kilteely prospect, located approximately 250 metres to the southwest of Group Eleven’s initial Kilteely hole drilled in 2019 (G11-450-02; see Exhibit 2). G11-2840-03 was drilled to a depth of 393 metres, testing the lithology and structure beneath the Limerick Volcanic Complex. Importantly, the hole encountered a significant amount of dissolution breccia within the entire target horizon (Waulsortian Limestone), providing compelling evidence for the presence of a large fault structure near-by (see Exhibit 2). Coupled with evidence of similarly disturbed lithologies in hole G11-450-02 and specifically, the down-drop of the Waulsortian limestone, the fault structure (or at least one of the fault structures) is believed to be located between the two holes. 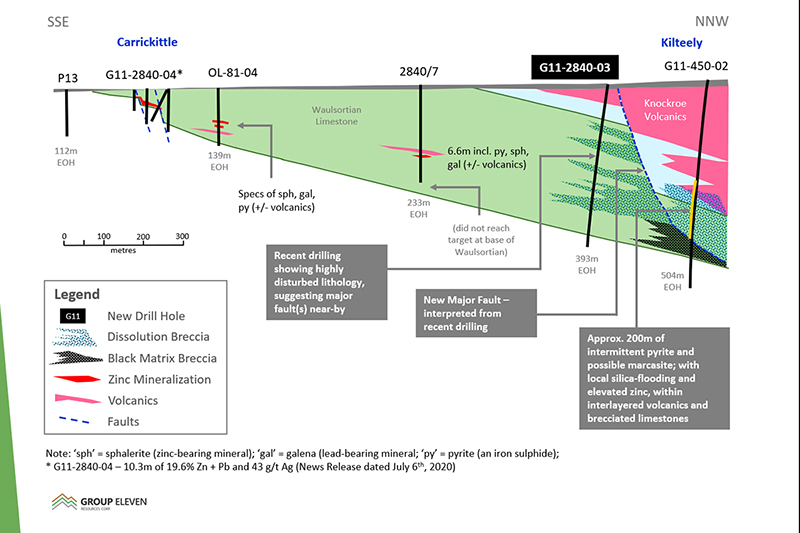 G11-2840-03 is located 1.1 kilometres north-northwest of the Company’s Carrickittle prospect. The Carrickittle-Kilteely section is part of the larger (25-kilometre-long) Pallas Green Corridor, extending from Glencore’s Pallas Green zinc deposit1 to the Group Eleven’s Denison copper-silver prospect (see Exhibit 1). The Company’s hypothesis is that mineralization from the Carrickittle prospect extends northwards towards the Limerick Volcanic Complex along multiple parallel trends oriented in a possible north-west or north-northwest direction. Detailed drilling at Carrickittle is ongoing in order to determine the specific geometry and orientation of mineralization, with a view to extending those trends northward.

The Corcamore prospect is located approximately 15 kilometres west-northwest of the Stonepark zinc deposit (5.1 million tonnes of 8.7% zinc and 2.6% lead in the inferred category; see Technical Report dated April 26th, 2018). Similar to the Stonepark deposit, the Corcamore prospect is situated proximal to volcanics related to the Limerick Volcanic Complex (see Exhibit 3). 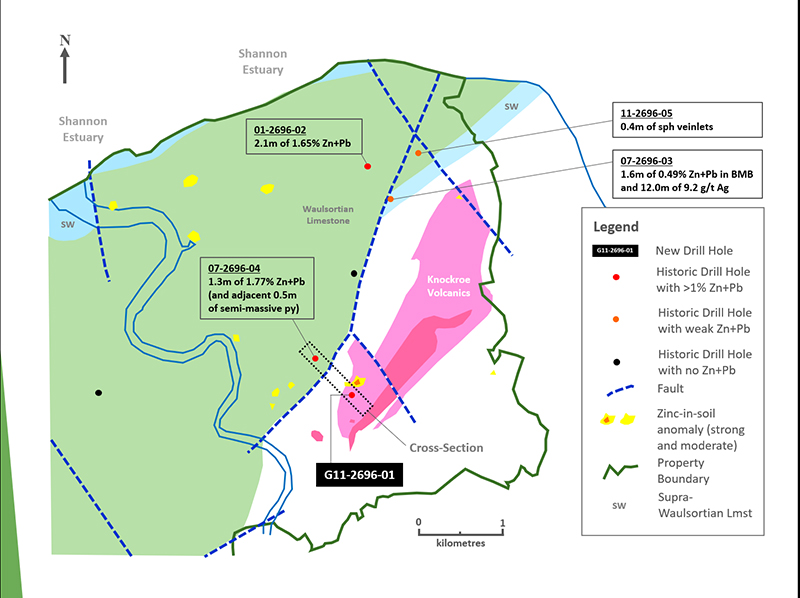 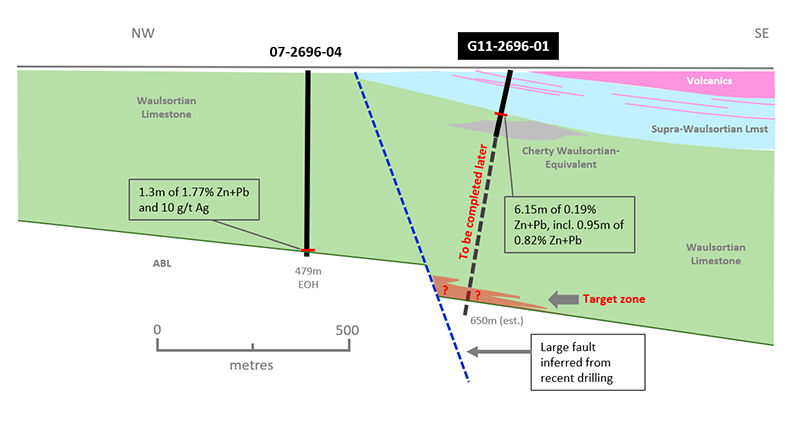 G11-2696-01 intersected the top of the target horizon (Waulsortian Limestone) at a deeper level than 07-2696-04, hence corroborating the presence of a fault in between the two holes. Importantly, G11-2696-01 intersected a highly-anomalous zone of mineralization (6.15 metres of 0.19% Zn + Pb, including 0.95 metres of 0.82% Zn+Pb) at the top of the Waulsortian unit. This is encouraging as it confirms the presence of a mineralizing system and increases the probability of robust mineralization at the target zone (base of the Waulsortian limestone; see Exhibit 4).

Due to budgetary constraints at the present time, Group Eleven planned to complete only the first section of the hole (to a depth of 171.0 metres), as this was sufficient to keep the ground in good standing. The casing has been left in the hole such that drilling can resume at a later date. Given the encouraging results thus far, Group Eleven sees finishing this hole in the near-medium term, as a high priority.

Three other holes were drilled at the PG West project. G11-2835-01, was drilled to a depth of 159.1 metres in the Crokerspark townsland, approximately eight kilometres west of G11-2696-01. This hole encountered trace sphalerite (zinc-bearing mineral) within the Waulsortian limestone at a shallow depth (5.8 metres). Pyrite was also noted throughout the hole and almost the entire Waulsortian limestone showed weak to well-developed dissolution breccias. A historic hole 450 metres to the south, intersected disseminated zinc over 22 metres and black-matrix-breccia (“BMB”) over 72 metres.

The evidence from both these holes clearly indicates a significant hydrothermal event has affected the area, which together with recently interpreted Tellus geophysical data (showing a number of east-northeast trending structures in the region), significantly increases the prospectivity of the Crokerspark area. Future work is strongly warranted.

Two holes were drilled in the Kilmallock area of PG West. The geology in this area was poorly understood and appeared to be potentially disturbed by faulting. Both holes aimed to provide a better geological context to this area. For reference, 2-3 kilometres southeast of the above drilling is Unicorn Minerals’ Kilmallock property which hosts the Bulgaden zinc occurrence (e.g. historic drill intercept returned 6.0 metres of 10.4% zinc and 1.8% lead). Also, interpretation of the recent Tellus geophysical data over PG West shows substantial volcanic/intrusive activity in the area, adding considerable prospectivity.

G11-1948-01 was drilled to a depth of 249.0 metres and encountered an unusual lithology not previously encountered by Group Eleven. This lithology suggests the presence of a localized sub-basin, likely bounded by significant faulting. Approximately 1.6 kilometres to the southwest, Group Eleven drilled hole G11-1947-01, to a depth of 81.0 metres. This hole confirmed the presence of Waulsortian limestone in the area. The above results warrant further drilling to better define the location of large fault structures and their possible genetic link to mineralization to the south and more broadly in the Limerick basin.