Vancouver, Canada, July 6th, 2020 - Group Eleven Resources Corp. (TSX.V: ZNG; OTC: GRLVF; FRA: 3GE) (“Group Eleven” or the “Company”) is pleased to announce that it has intersected 10.3 metres of 14.6% zinc, 5.0% lead (19.6% combined) and 43 g/t silver at its drilling on its 100%-owned PG West Project in the Republic of Ireland. Mineralization is shallow, open along strike and represents not only the best mineralization ever encountered at the Carrickittle prospect (“Carrickittle”), but also the best mineralization Group Eleven has drilled since inception of the Company in early 2015.

“The thickness of massive sulphides and associated grades reaching as high as 55.7%1 zinc and lead, was a much better result than expected. This intercept represents a breakthrough in our understanding of how mineralization is oriented at Carrickittle and offers a compelling hypothesis as to why historic drilling missed or seemingly only skimmed along areas of mineralization,” stated Bart Jaworski, CEO.

“Finding such high-grade mineralization at shallow depths is a very rare occurrence these days in the industry and it is highly encouraging for Group Eleven. Carrickittle is a prospect that lay largely dormant for over 54 years after it was labelled as ‘sub-economic’ in 1966. The prospect, however, now clearly appears under-drilled and under-conceptualized – and requires immediate follow-up.”

The Carrickittle prospect is located on the Company’s 100%-interest PG West project located in the Limerick basin, in south-western Ireland (see Exhibit 1). The prospect lies within the Pallas Green Corridor, a 25 kilometre-long trend of mineralization defined by the Pallas Green deposit2 in the north and the Company’s Carrickittle, Ballywire and Denison prospects to the south. 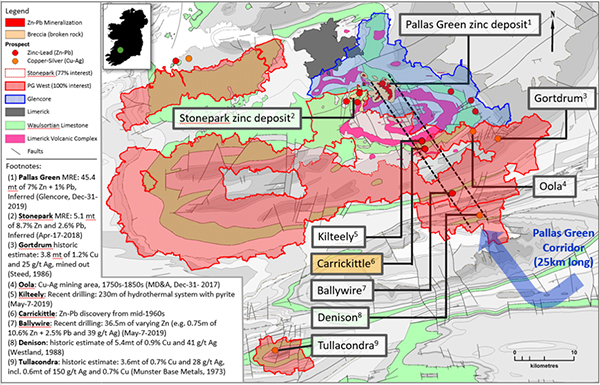 Results from G11-2840-04 demonstrate that P18 appears to have skimmed approximately parallel along the top of a zone of massive sulphide which dips moderately-steeply to the west (see ‘After’ in Exhibit 2).

Exhibit 2. ‘Before’ and ‘After’ Cross-Sections of Recent Drilling at Carrickittle Prospect, PG West Project

Note: ‘%’ means zinc + lead (see Exhibit 3 and 6); location of the cross-section line is shown in Exhibit 4; the intercept ‘0.9m of 17.6%‘ is contained within a wider zone of mineralization.

Assay results from G11-2840-04 and the plan drill hole map are shown in Exhibit 3 and 4. Importantly, the overall grade of the interval in G11-2840-04 is likely to be understated as the 6.6-metre-thick massive sulphide interval contains 1.10 metres of no core recovery (material was soft and friable) and the grade for this missing interval was assumed to be zero. The fact that several small fragments of massive sulphide were observed in this interval suggests the grade may be similar to the samples on either side of it.

Note: All above intersection are interpreted to be approximately true thickness; * Small fragments of massive sulphide were recovered but not enough to assay; “Zn-Eq %” combines Zn, Pb and Ag into a single number and is calculated from metal prices (US$) as follows: $1.00/lb Zn, $1.00/lb Pb and $15.00/oz Ag; “sph” is sphalerite (zinc bearing mineral); “gal” is galena (lead bearing mineral); “py” is pyrite (iron sulphide); “WL” means Waulsortian limestone; “w” means ‘with’.

Exhibit 4. Plan Map Showing G11-2840-04 and All Historic Holes at Zone 1 of the Carrickittle Prospect 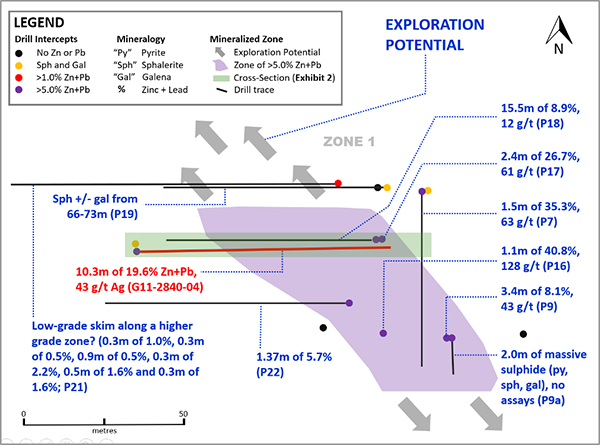 Note: “Sph and Gal” above means that some sphalerite (zinc-bearing mineral) and galena (lead-bearing mineral) were observed in the core, however, in insufficient amounts to warrant assays (laboratory analysis).

The fault zone and the orientation of the massive sulphide body provide a very specific exploration vector towards the north-northwest and south-southeast. Approximately 25 metres to the north of G11-2840-04, historic hole P21 intersected six discrete zones (0.3 metres to 0.9 metres wide) of low-grade mineralization (0.5% to 2.2% zinc and lead; see Exhibit 5) over a downhole length of 79.3 metres. Hole P19 similarly intersected low-grade mineralization from 66 metres to 73 metres downhole. This suggests that P21 and P19 may have been drilled along the low-grade top of a mineralized body, similar to P18. 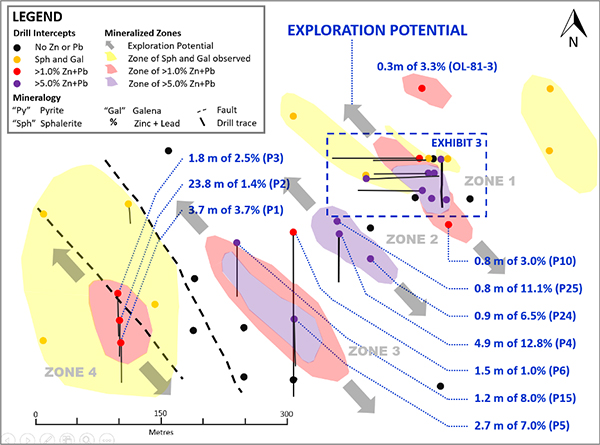 Note: “Sph and Gal” above means that some sphalerite (zinc-bearing mineral) and galena (lead-bearing mineral) were observed in the core, however, in insufficient quantities to warrant assays (laboratory analysis).

In addition to Zone 1, three other zones of known mineralization exist at Carrickittle (see Exhibit 5) and each now requires immediate follow-up and reinterpretation. Historic drilling in Zones 2, 3 and 4 was oriented similar to Zone 1 (i.e. vertical or to the south), therefore, may have also missed the main sulphide bodies.

Outside of known areas of mineralization, immediate exploration upside resides along a series of northwest-trending faults at the Carrickittle prospect (see Exhibit 5). These faults are known to be associated with intense dolomitization, an alteration type commonly linked with zinc mineralization in Ireland. The faults are also parallel or sub-parallel to the fault controlling mineralization in G11-2840-04, and more broadly, the Pallas Green Corridor (see Exhibit 1). Several historic holes were conducted in the vicinity of these faults, however, were sparsely drilled and not oriented to the west.

As a general comment, the presence of thick, high-grade massive sulphides suggests that, not only were the necessary geologic conditions for zinc mineralization present, but they may have been extensive and long lasting. If true, this further adds exploration potential to the Carrickittle prospect.

Carrickittle was discovered in 1965 by Tara Exploration and was drilled throughout 1965 and 1966 with 33 holes. Follow-up work in the late 1960s and 1970s largely focussed on regional exploration in the area with an emphasis on soil geochemistry and ground geophysical surveys, as well as, geological mapping. In 1981, Billiton drilled seven vertical holes in a wide-spaced pattern forming a semi-circle on the northern side of the prospect (returning only weak mineralization).

To Group Eleven’s knowledge, previous operators did not focus on the exact orientation and controls of mineralization at Carrickittle and little work (outside a few shallow holes) was done to test the NW oriented faults in the area. Based on the large number of vertical holes drilled, previous operators appear to have been searching for flat-lying mineralization (as opposed to steeply-dipping). Historic exploration also tended to follow an east-west direction, along the strike of the prospective horizon (Waulsortian Limestone).

Group Eleven continues to progress on the remainder of its drill program in the Limerick area and will release results in due course, once work is completed and results are received, compiled and analysed.

Drill-core samples were prepared and assayed in the ALS Minerals Laboratory in Loughrea, Ireland. Samples were fine-crushed (CRU-31) to 70% < 2mm and pulverized and riffle-split to 85% < 75 µm. Zinc, lead and silver assays were obtained by multi-acid (4-acid) digestion/ICP-MS Package (48 Elements), with ore-grade samples and Au also analysed using multi-acid ICP-AES. Analytical accuracy and precision are monitored by the submission of two standards and one blank inserted into the sample train of 18 samples by Group Eleven personnel. No duplicate samples were sent to the lab. ALS ran one blank and two duplicates as part of their internal QC procedures.