The Tralee Project is 100% owned by the Company and consists of 15 PLs (totaling 512 square kilometres), situated in southwestern Ireland. The area has been largely overlooked in terms of exploration since the early 1980s relative to other parts of the ‘Irish Orefield’, except for the Castlemaine prospect which has seen limited, sporadic work over the last 20 years. One of the key aims for Group Eleven is to determine if the Castlemaine prospect has potential to host significant zinc mineralization. Early evidence suggests similarities to the Kilbricken zinc deposit in County Clare (owned by Hannan Metals Limited). 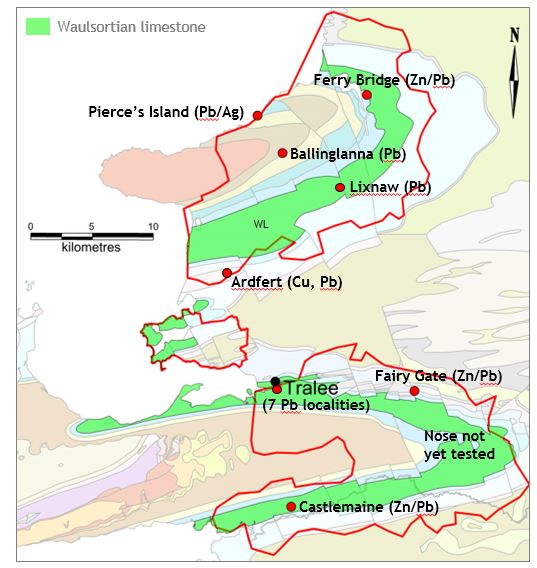 Drilling by the Company in late 2016 and early 2017 under the old workings intersected 130m of clean, course grained calcite which is believed to potentially represent a fugitive calcite cap associated with a hydrothermal system. Calcite bodies on this scale are rare in Ireland, however, they are well documented in County Clare. To the Company’s knowledge, there are only four such occurrences in Clare (Kilbricken, Milltown, Ballyhickey and Spancil Hill) and all, but one, are associated with zinc/lead mineralization, most notably the Kilbricken Zn-Pb-Cu-Ag deposit (operated by Hannan Metals Limited). Overall, there are indeed several similarities between Castlemaine and the Kilbricken deposit, as summarized below:

The next step in exploration at Castlemaine will consist of drilling below the calcite body, in order to test for intensification of the hydrothermal system and zinc mineralization toward the base of the Waultsortian limestone.